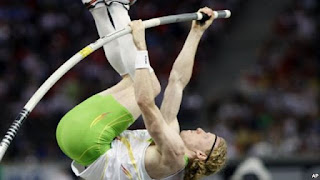 At the very first Olympic Games, in 1896, an American won a gold medal in the pole vault event after jumping 3.30 meters using a wooden pole.  Four years ago in Beijing, an Australian won gold in the same event with a 5.96-meter jump. The pole he used was lighter and stronger and made from carbon fibers.

When the 2012 Olympic games opens Friday night, athletes will not only be better-trained than ever before, but also better-equipped.


In fact this really is nothing short of a revolution, particularly in the use of advanced materials, integrated with engineering design.

Athletes with lighter and stronger bats, rackets and golf clubs can hit balls further, harder or with more spin. Often these engineering innovations can be tracked by the records in the sport.

Until the Beijing Games in 2008, there was an average of 22 record-breaking performances during each Olympiad.

At the Beijing Games, 108 new records were set. In swimming, 94 percent of the races were won by athletes wearing full-body swimsuits made with engineered materials.

This ignited a debate over so-called ‘technological doping,’ that materials - like those in the swimsuit - give the 'haves' an unfair advantage over the 'have-nots.'  The governing body for swimming later banned the special suits from competition.

So if you have technology dominating, or if you have a technology that’s limited to richer nations, then the ethos of fair competition comes into question. 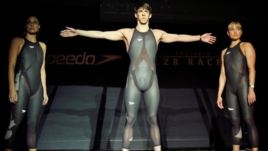 While the full body swimsuits made a big splash in Beijing, new equipment won’t be as visible in London. Most of the technological innovations boosting athletic performance are more evident during the training process.

Huge amounts of advancement in miniaturisation of sensors, in wireless technologies, in the way athletes communicate with their performance teams, in the way we monitor an athlete’s recovery from a training program, in the way we look at their nutritional status and make changes to what they are eating and drinking and so on.

The materials engineered for elite athletes, like the strong, flexible carbon fibre used in clubs, rackets and bikes, have also found a solid foothold in the market place. They are common components in cars and airplanes and have been incorporated into the design of modern wheelchairs.

Motion tracking is another sports-training innovation, developed for monitoring the swing profile of tennis players and golfers. It is now being used for stroke rehabilitation, where you can look at the gait patterns of the patient and how closely they are to a normal gait pattern.
So, it is clear that there is need to balance innovation and tradition in sport is set to remain an enduring and compelling challenge.


This question will come up - I suspect - as we role further into the London Olympics. Reason being, if 'significantly' more World and Olympic records are broken in sports that rely heavily on equipment, then, well technological innovation will be called into question.

Are you listening Gabby Logan?