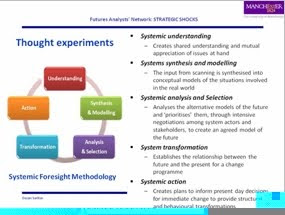 The Manchester Institute of Innovation Research (MIIR) are working on an EU project for uses of Futures Studies on government policy in an attempt to adapt to an ever faster, more discontinuous world.

MIIR point out that when we consider a major futures driver such as breakthrough or disruptive technology (self-assembled nanobots, holographic microprocessors, £495 desktop 3D printers @ home, artificial telepathy - all noted in this blog over the years) people tend to ask what is feasible and what we are sure will work. We are less likely to ask what we want, what is desirable, what we need to get on.

MIIR have developed a methodology called Systemic Foresight, which allows annalists to map influences on the system, pointing to distractions to avoid, as well as issues to focus on. Its use leads on to a Transformation phase, at which the finding can be applied to ‘lead to a better world.’

The analysis methodology shows that geopolitical and security issues generate most Wild Cards and Uncertainties; that new science and technology produce most discontinuities; and that society and culture produce the most Weak Signals hinting at the future.

(1) Environmental and financial crises as the biggest issues for the period from 2010 to 2016 (e.g.; mass displacement, little money in pocket, global financial melt down).

(3) While climate change and fundamental resource scarcity (e.g.; Siberian winters in Spain and higher Oil, Water, Pizza prices) are the main concerns beyond 2025.

I found the slide show (below) outlining the method quiet interesting. My only comment is that they are addressing issues we know well, gaining public momentum, with multiple intergovernmental strategies and plans to ‘lead to a better world.’
.
What I would ask is that MIIR now move on to issues that concerned nations are not already addressing. For example, what of the interdisciplinary impact across these issues? How they act as a complex interconnected system? Further, what of the technologies not yet on the strategic agenda, yet will turnout to not be merely instrumental in solving critical problems, but make them wholly irrelevant.

As I say people tend to look and ask for what is feasible, what is sure to work. Because it's safe, more politically inert, and in the short-term keeps the wolf from the door. As a result, we are much less likely to ask what we want, what is desirable, what we need to get on.

Further, even some of the most forward futurists back down, almost intuitively, on cutting-edge breakthrough innovations and archetype events.

For example, what are the 'new laws of economics' not only in an interconnected world, but in a world of instant production in your home. What happens to the distribution infrastructure, when most things - from cloths to computers to mosquito nets - are made of diamondoid nanostructures @ home or a tree house or shack by a smallish size device, that's mains gas fed?

What happens to abject poverty when nanomanufacturing hits a point when it can instantly produces hot soup and a roll from raw soil, waste and even sewage? What happens to the economy, the ecolology?

And one of the biggest human cultural questions of all: 'What will change everything.' Is there anything on the horizon that will? Please click on and see.

In sum: we need to look at the future with much deeper systemic foresight; and take a courageous look at the many archetype issues not yet on the map.
Anyway, please click here for slide presentation.
Posted by Unknown at 18:33