Sponge Soaks Up Jet Engine Noise
Sound waves from loud engines disrupt neighbourhoods, cause hearing loss in workers nearby, and can even damage the engine itself. By muffling the noise of gas-turbine engines, a new device may also make them safer. 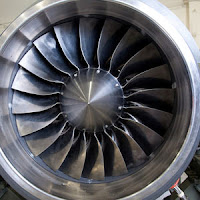 A roaring jet engine is one of the loudest objects on earth. At 140 decibels, the noise is on par with gunshots and rock concerts, and can immediately and permanently damage human ears; even hearing protection can stave off damage only for short periods of time. And it's not just ears that are at risk: Intense sound waves from aircraft engines vibrate the plane's hardware, causing wear and, potentially, mechanical failure. "If engine damage occurs, it's very disastrous," says Ajay Agrawal , a mechanical engineer at the University of Alabama. 'It doesn't happen often, but it could happen at any time, and can destroy the engine within seconds.'
That's why Agrawal has been developing a device that could curb engine noise not just in aircraft, but in factories, power generators, machinery, and other engines. While most sound-reduction measures such as noise dampers and ear protection try to cope with the noise, Agrawal's new device is intended to prevent the sound from being generated in the first place by changing the way fluids flow through an engine.

In the heart of a combustion engine, fuel mixes with hot air. As the air and fuel are pumped into the combustor, turbulence and swirling vortices develop. These vortices vary in size, speed, and direction of flow. Differences in flow create differences in pressure inside the engine, and because sound consists of pressure waves flowing through a medium, the fluctuating pressures inside the combustor create noise.
Agrawal says that combustion is like a microphone for that noise. When fuel meets flame, combustion adds energy to those fluctuations, thus making them louder. Noise can come from other parts of the jet engine—for example, air pumps and spinning turbine blades—but Agrawal says that combustion's uneven energy release is the main source of the incredible noise.
Agrawal created a device that can be placed directly into a combustor. The porous, ring-shaped "sponge" is made of heat- and pressure-resistant hafnium carbide and silicon carbide. It's roughly the size and shape of a roll of electrical tape, but can be customized to match different engine types. The device is not commercially available yet, but considering gas-turbine engines can cost anywhere from $100,000 to tens of millions of dollars, Agrawal says the device would comprise a small fraction of the overall cost.

The Noise Sponge.
The sponge reduces engine noise in three ways. First, it evens out the air–fuel mixture inside the cylinder because the sponge's structure blocks some vortices from forming. By ensuring that the mixture flows evenly inside the combustor, the device reduces pressure differences, thus reducing sound production. It's the equivalent of whispering into a microphone instead of yelling, Agrawal says.
The second piece is reducing combustion's ability to amplify those sounds—turning down the volume on the microphone, in Agrawal's analogy. "The amount of amplification depends on how intense the combustion is," he says. "If you have a lot of heat in small area, there is a lot of amplification. If the heat is spread all over, amplification is lower." Because the sponge spreads the fuel more evenly across the chamber, overall combustion intensity is lower and so the sound waves are less powerful.
Thirdly, the device acts as an actual sponge that absorbs some sound waves after they're produced rather than letting them ricochet around the metal combustor.
Together, these three mechanisms enable the sponge to reduce aircraft-engine noise by as much as 30 decibels, Agrawal says. That cut is enough to bring a jet engine's roar from the level of a rock concert down to the level of a lawnmower or chainsaw—loud, but not deafeningly so. Agrawal's research was aided by a U.S. Navy grant and the Ultramet company.
Tim Lieuwen, an aerospace engineer at Georgia Tech', says the most interesting aspect of the new device is that it doesn't appear to harm engine performance while it reduces noise. Previous attempts to muffle the noise of gas-turbine engines had resulted in big losses in efficiency, he says. "In general, the more effort it takes to push air through the combustion chamber, the better it reduces sound." But that extra effort also makes the engine less fuel efficient. Lieuwen says that Agrawal's device provides the best of both worlds.
So far the noise sponge has been tested only in laboratory combustors, but Agrawal says he thinks it could easily be incorporated into aircraft engines; it can be designed to fit almost any engine, and can be added on as a retrofit.
Still, the only way to know whether the device can effectively reduce noise in gas-turbine engines would be to test it in a real-life scenario. If it works, it could help extend the life of aircraft and industrial machinery, and make workplace environments safer. And that's music to our ears.
Posted by Unknown at 11:46