If it were possible to tag one man with firing up the RM revolution; it would have to be the bold and innovative Charles ‘Chuck’ Hall. Chuck qualifies, because in 1986 he patented the much acclaimed workhorse Stereolithography (SLA); the original RM archetype. The system was first introduced in 1991, what was back then deemed as a Buck Roger’s toy and re-selling at a whooping five-hundred-thousand dollars!

But toy it was not! The breakthrough device was the first system ever to produce physical 3D models by so-called additive processes. The SLA machine used beams of ultraviolet laser light on curable liquid photopolymer resins, in turn using cross-linking to create a solid, layer-by-layer. After the pattern has been traced, the SLA's elevator platform descends by a distance equal to the thickness of a single layer (typically 0.05 mm to 0.15 mm); then, a blade sweeps across the section of the platform; re-coating it with fresh material. On this new liquid surface, the subsequent layer pattern is traced, joining the previous layer. A complete additive 3D component is formed. After being built, parts are immersed in a chemical bath in order to be cleaned of excess resin and are subsequently cured in an ultraviolet oven.

Quantum physicists oft pose that the Universe has not merely three-dimensions, plus one other we call time; but eleven! When one tries to think of a multidimensional Universe, it tends (or at least for me) to boggle the mind. That we can at least see three of the dimensions (up, down, and sideways)  and experience the fourth (the alarm clock going off in the morning). But Q-physicists are adamant that the other 7 dimensions are very tiny and folded-up inside each other in a kind of complicated origami space-field. Mind boggling! But what does that have to do with RM?

Over that last two decades the range of materials available for RM has burgeoned from the original low-resolution homogeneous photopolymer to a broad array of performance heterogeneous materials athwart of co-polymers, metal alloys, fine grained ceramics and hybrid composites.

Objects Connex 3D by Stratasys, for example, is a printing system that has the capacity to fabricate so-called Digital Materials that give predetermined mechanical properties and parameters which emulate the final manufactured product intended material performance.

Two discrete materials, picked from 17 primary materials can fuse in 136 potential combinational universes [(17(17-1)/2=136]. A Connex part can be printed with 14 material multidimensional combinations in one 3D printing procedure (my 11 dimension Universe metaphor – now I get it!). The material can simulate elastomeric behaviours ranging from Shore hardness 27-to-95, ridged, tough to engineering grade ABS.

This begins to illustrate the new technical capability for such RM technology. A mere 10 years ago, this would have been quite impossible.

As a young design engineer I used to tease the toolmakers I worked with when making design modifications. There is an age old problem where if a component feature, like an aperture or diahole had to be increased; then the core inside the mould tool had to be increase in size as well. And that invariably meant the core had to be replaced with a larger hub, increasing time and capital costs. ‘When are you going to invent a metal on-tool,’ I would moan. But that was back in the 1990s.

Now comes a host of ‘metal-on’ RM equipment. One being Arcam EBM® Electron Beam Melting, which builds up metal powder layer-by-layer, fully dense metal components, which is melted by a powerful electron beam. Each layer is melted to the exact geometry defined by a CAD model.

This is a new paradigm for industrial manufacture as metal is added instead of removed, as in the case in traditional machining. EBM allows for the building of parts with very complex geometries without tooling and fixtures; and without producing any waste material. Good for reducing capital costs, good for the environment. 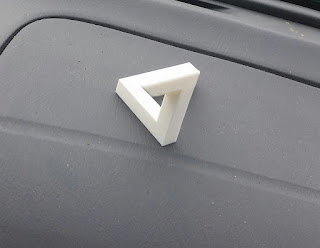 Rapid Manufacturing systems are giving new life to spaces and shapes once only relegated to the imagination. Real components are being made that were thought quite impossible geometrically 10 years ago. You may have seen 2D pictures of the inverse-impossible loop that folds itself up inside itself? Now, 3D Systems are printing out seemingly impossible convoluted geometric pattern. I think M.C Escher would be dumbfounded. New, strange and counterintuitive geometry is now being explored in physical reality.

By simulating nature’s organic structured lattice, convoluted organic forms are facilitating designs that are lighter and have more efficient structures which have significant strength to wait ratio  improvement (Now you know why nature’s humble Bumble Bee can fly, when it is not suppose too!).

Lighting products such a focusable spotlights, photometry systems such photometric measurement or high precision telescopic lens are beginning to me made on the spot for pennies with no tooling capital investment costs.

Protos, a custom eyewear venture established in San Francisco, produce sunglasses via 3DP. Protos aim for striking designs, cost prohibitive through conventional manufacturing methods. Finding a pair of rays that fit and looks kool is, for many Californian types, a niggling problem, often ending in a compromise on the customer’s part. The design strategy is to tailor a fit based on an individual’s facial measurements uses advanced manufacturing such as selective laser sintering, 3D scanning and parametric 3D modelling to develop and manufacture customizable products that would not exist by other means.

The next leap-on in the RM world is Multifunctional Inks and Multifunctional Deposition Heads.  ‘Functional’ at its entry level means parameters like tough, inert or transparent (above). It can also mean insulating (dielectric), semiconducting and conducting. However, where this process gets interesting is the creation of Multifunctional Materials! Otherwise known as smart or dynamic materials; multifunctional materials have specific active behaviours and properties. In turn, such n-materials are made from multifunctional inks which enable the manufacture of complex active components with three-dimensional gradients and differentiated structures; say from sliver-to-plastic-to-ceramic-to-carbon, et al.  Resulting in paradoxical differentiated fine-grain isotropic multimaterial structures.

Clearly, such smart enabling inks need a way of being deposited: hence, multiplicative deposition heads. These enable multiplicative processes, not just additive processes. One of the most disruptive technologies here is the so-called 3D inkjet-multihead. The multihead is one of the prime enabling technologies for geometrically complex, differentiated gradients and active multifunctional materials. The goal of multihead deposition is to be print layer by layer, at the sub-micron level, without any post processing.

Together, multifunctional-inks and multihead-deposition means a major milestone for RM technology: to print out complete functional components and assemblies in one hit. For example, the notion of printing out a working television remote controller may seem outlandish, but a team of engineers at the University of California are developing multiplicative inkjet heads that does just that. Instead of fabricating a plastic housing and then arduously populating it with components, circuit boards, and connectors, a complete and fully assembled functional device is printed in one hit.

Commodity devices such as handheld touches, radios, mobile phones or pocket calculators will emerge as fully working systems, in one hit. A television remote controller printed as a single continuous multifunctional assembly would contain the buttons, a polymer-based infrared emitter and polymer-based electronics, as well as the light-emitting device. Clearly the way artefact are made are about to go through radical transformation.
Posted by Unknown at 16:30