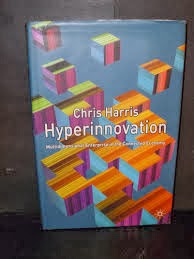 My book ‘Hyperinnovation’ was published in 2002. The product of 12 years R&D, with its primitive inception in 1990.

Its underlying idea was (is), ‘The multidimensional Interconnection of Ideas.’ The collateral convergence, divergence, paralleling, customising, real-time and accelerated pace of innovation.

In the late 1980s, when I began to maul over and incubate that concept, I had hard time debating the idea (let alone achieving dialogue) with my peers. Back at the end of the 80s, things - technology, organisations (inside and out), markets and industries – were a hell of lot more disparate and disjointed.

The Internet was some esoteric term, and the technology mostly and often exclusively exploited by the highbrow scientific community. The World Wide Web had not even got out of bed. In parallel, Automobiles were still a near empty tech-box on wheels. Utilities (gas, electric, water, telecom) supply came from a linear, single resource service vendors. Cell Phones were the size of a brick, and all you could do was ‘Voice!’ Music, videos, gaming, and books, came via discrete physical mediums. Socialising meant mostly going to the pub, park or family Sunday Lunch. Point is, things were a whole lot more disconnected back in the day.

Today, the term Hyperinnovation is part of universal business language. Reflecting the reality that things are evermore interconnected; and thus dynamic, virtual, instant, and perpetually evolving.

But the underlying idea of Hyperinnovation has been leveraged and transformed into many kinds of new idiom from street slang to high-end commerce. Here’s a list:

·  Mashup! As in, pulp together. By way of example, Mashup.com is one of the premier tech-newscast site. Always on the cusp; always interconnecting (mashing) fresh ideas.

·  Mixology! The study of blending physical, virtual and imagined concepts. Coined by Lord Alan Sugar on his ‘The Apprentice’ programme; he has been an advocate of the interconnected business worldview for some time now.

·   GE’s Hyperinnovation. Looks at the ingredients for a successful and well-balanced innovation program – www.innovationexcellence.com.

·  Is it Time to Rewrite the Innovation Playbook: Ten New Requirements in the Age of Hyperinnovation. www.innovationmanagement.se.

· Get ready for hyperinnovation. By Jim Carroll. www.camagazine.com.
Posted by Unknown at 15:08