Cheetah Ultra Sports Whip F-117 is an interesting new snowboard design. Company called Cheetah Ultra Sports has spent four years developing the product which I believe won’t work well on all terrain. There is a big opening in the middle of the board, which makes us scratch our heads here at the “Homeboy Headquarters”.. Why on earth has a snowboard got a huge opening in the middle? 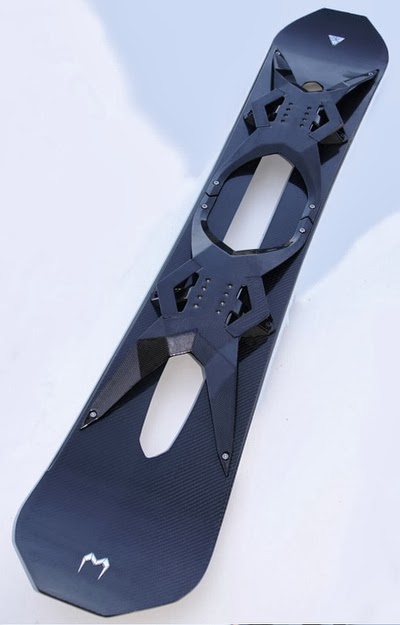 Cheetah Ultra Sports says, “The main purpose of the opening is to reduce the amount of surface which comes in contact with snow. Smaller surface means less drag, which translates into more gliding speed.”

Wow! Wait a minute.. Less surface means more gliding speed? Maybe this idea works on hard slope, but when riding powder snow I guess the opening will cause some serious trouble. I believe you get tons of snow right on your face through the big opening. I might be wrong, but what else could we expect?

Then those huge “shelves” for attaching bindings of Whip F-117 look really interesting to me. Why so big? Unfortunately I don’t know the answer to my question, but there must be a good reason. Anyhow they look cool, eh? The cool design has also the negative side, and it is the fat price of $1,900.

Written by: Marko Pyhajarvi
Posted by Unknown at 19:32