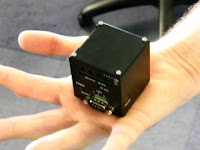 Measuring just 2 by 2 inches the ‘Space Cube’ is a tiny PC developed by the Shimafuji Corporation in Japan.

Although the Space Cube isn´t currently available outside Japan, a company called Star Dundee plans to start selling the device after making some improvements. When it goes for sale, the Space Cube will be priced at around £1,500.
Posted by Unknown at 20:30