Basically that little mouse (Jerry) lost a tooth and grew a new one in its place with the help of some scientists:
To create the new tooth, the researchers took epithelial cells and mesenchymal cells from a mouse embryo and cultivated them together in a collagen-based medium to create a tiny tooth bud. A mass of tissue that has the potential to develop into a tooth.
This mass of tissues was implanted in the spot where Jerry's old tooth used to be and after fifty days that mouse could nibble on cheese properly again. The new tooth grew to the same height as the surrounding ones, is just as hard, and has all the same blood vessels and nerves. 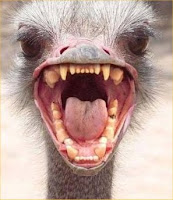 But when one considers the future of Bioethics in this context, the picture the late Rod Hull's'Emu' says a lot:


Deeper up date with video.