From Farming to Pharming! 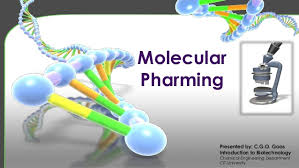 Pharming. Genetically modified – transgenic – animals are used to produce human proteins that have medicinal value. The protein encoded by the transgene is secreted into the animal's milk, eggs or blood, and then collected and purified. Livestock have already been modified in this way to produce several useful proteins and drugs. Many human proteins used as drugs require biological modifications that only the cells of mammals, such as cows, goats and sheep, can provide. Biopharmaceutical production in transgenic animals is a good option, because they are reproducible, have flexible production and are easily maintained. They also have a great delivery method: just milk them. The first products of pharming genetic engineering were protein drugs like insulin and growth hormone.

Transgenic plants, too, can be used to produce proteins, which are made in large quantities by genetically engineered bacteria or yeast in large bioreactors. Transgenic tobacco.

One intereting area of pharming is havesting engineering mateail form the milk of transgenic goats. For example, the dragline form of spider silk is regarded as the strongest natural material yet known. It is about 5 times stronger than steel and twice as strong as Kevlar. There is along way to go to perfect this, but goat silk would replace many common petroleum-based products that require toxic chemicals to produce.

Probably the most intensively investigated class of physiologically-active components derived from animal products are the (n-3) fatty acids, predominantly found in fatty fish such as salmon, tuna, mackerel, sardines and herring. The two primary (n-3) fatty acids are eicosapentaenoic acid (EPA; 20:5) and docosahexaenoic acid (DHA; 22:6). DHA is an essential component of the phospholipids of cellular membranes, especially in the brain and retina of the eye, and is necessary for their proper functioning. DHA is particularly important for the development of these two organs in infants, and just recently, the FDA cleared the use of DHA and arachidonic acid for use in formula for full-term infants. Hundreds of clinical studies have been conducted investigating the physiologic effects of (n-3) fatty acids in such chronic conditions as cancer, rheumatoid arthritis, psoriasis, Crohn’s disease, cognitive dysfunction and cardiovascular disease, with the best-documented health benefit being their role in heart health. A recent meta-analysis of 11 randomized control trials suggests that intake of (n-3) fatty acids reduces overall mortality, mortality due to myocardial infarction and sudden death in patients with CHD.

The 2000 American Heart Association Dietary Guidelines recommend two servings of fatty fish per week for a healthy heart, and the FDA authorized a qualified health claim on dietary supplements linking the consumption of EPA and DHA (n-3) fatty acids to a reduction of coronary heart disease risk. The qualified claim states: “Consumption of omega-3 fatty acids may reduce the risk of coronary heart disease. FDA evaluated the evidence and determined that, although there is scientific evidence supporting the claim, the evidence is not conclusive.” A “qualified” claim was authorized because of certain safety concerns regarding the consumption of high levels of (n-3) fatty acids, including: 1) increased bleeding times; 2) increased risk for hemorrhagic stroke; 3) the formation of biologically active oxidation products from the oxidation of (n-3) fatty acids; 4) increased levels of LDL cholesterol; and 5) reduced glycemic control among people with diabetes. The FDA concluded that use of (n-3) fatty acid supplements is safe, provided daily intakes of EPA and DHA from supplements do not exceed 2 g/d.
Another classof biologically active animal-derived components that has received increasing attention in recent years is probiotics. Defined as “viable microorganisms that are beneficial to human health”, the health benefits of probiotics have been considered since the turn of the century when the Nobel prize-winning microbiologist Metchnikoff first postulated that lactic acid bacteria contributed to the longevity of Bulgarian peasants. It is thought that a wide variety of live microorganisms can contribute to human health, although the evidence is mainly from animal studies. In addition to numerous strains of Lactobacillus acidophilus, other strains of lactobacillus are being incorporated into functional food products now on the market including L. johnsonii La1, L. reuteri, L. GG, and L. casei Shirota. A recent Scientific Status Summary on probiotics from the Institute of Food Technologists summarized the scientific support for the therapeutic and/or preventive use of these functional ingredients for various health concerns including cancer, intestinal tract function, immune function, allergy, stomach health, urogenital health, cholesterol lowering and hypertension. The review emphasizes that the future success of probiotics will require strong support from medical and nutrition scientists and that studies documenting these effects in humans are limited.

Another nonplant ingredient that has been the focus of increased research efforts in recent years is conjugated linoleic acid (CLA). This component, which was first identified as a potent antimutagenic agent in fried ground beef by Pariza and co-workers, is a mixture of structurally similar forms of linoleic acid (cis-9, trans-11 octadecadienoic acid). CLA is present in almost all foods, but occurs in particularly large quantities in dairy products and foods derived from ruminant animals. For example, uncooked beef contains 2.9–4.3 mg CLA/g fat, whereas lamb, chicken, pork and salmon contain 5.6, 0.9, 0.6, and 0.3 mg CLA/g fat, respectively, and dairy products contain 3.1–6.1 mg CLA/g fat. The inhibition of mammary carcinogenesis in animals is the most extensively documented physiologic effect of CLA, and there is also emerging evidence that CLA may decrease body fat and increase muscle mass both in rodent models and in humans, although not all human studies have been positive in this regard. There is also preliminary evidence that CLA may increase bone density in animal models.
Posted by Unknown at 11:56