‘The Nerve of the World has been Deadened  for Centuries to the Vibrations of African Genius.’

For the infamous Great White Hunter 100 years ago, Africa was indeed an Undiscovered Country. Astonishingly, so it is again. But this time, the uncertainties and unknowns are deep within the commercial jungle and technological planes with strange and exotic opportunities.

Quite impressive and deep structural changes are occurring so fast, that sizeable divisions of the continent’s economy has suddenly developed into bustling marketplace. Big macroeconomic legacies that simply do not get the attention they deserve.

And there are plain reasons for this. Africa’s enduring character over the last one-hundred years has been one of struggle: exploitation by the west, war-torn provinces and deadly conflict, zero-sum political gaming, famine’s misery, highly skewed infant mortality; and set against Millennium Development Goals Africa has lost considerable ground in combating disease and epidemic blight. Hence, the long account of substantial parts of the African continent in turmoil.

Abject poverty has, and will remain at the heart of Africa's challenges for some time to come. Even middle income countries like Gabon and Botswana have sizeable sections of the population living in severe poverty. So it is understandable that Africa has long been considered a continent least attractive to investment. Hence, the world’s media preoccupation with Africa malfunctions and systemic malaise.

This view, however, is shifting. Recent discovery of new resources and continuous striving by African leaders to improve the socio-economic welfare are changing the dynamics of these economies. Dramatic and rapid change is taking place in the heart of the continent.

Do not be surprised if in years to come, that like the Dragon and Puma nations, Africa’s appellation becomes the formidable Lion-states! Do not forget that Africa is a vast continent with extremely diverse and distinctive cultures; holding unprecedented uncultivated arable landmasses, with the largest deposits of untapped natural resources in the world, coiled with vast economic potential.

But before we go off and explore the numbers and complexities, it is a good idea for you to actually get your head around how geographically big Africa’s is. Because it is ultra-huge! Contemplate the fact that man’s mother country easily swallows the whole of the USA, China, India, Japan, and all of Europe combined and could still find room for a few more provincial states.


Look at the picture closely. Spend a few minutes studying and contemplating it. Think not the past. That is too late. But think future. Think future politics. Think future resources. Not just merely oil. But think fresh ground water, foods, ores, mineral, precious metals, gems, potential, innovation, and GigaMarkets! 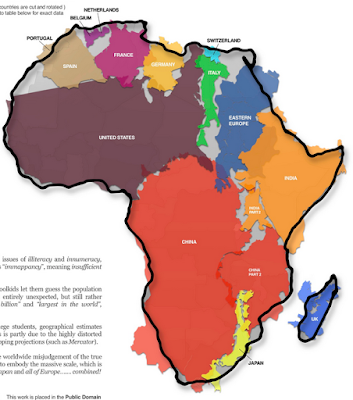 Because Africa, with all its modern legacy and thunderous challenges, the true mother country is about to come on to the world stage in a way and magnitude that no man has seen or been before.

Whether prehistoric, ancient, contemporary or prospective, big Africa is a continent full of revelation and enigma. Retrospectively, it is easy to forget that Africa is our primal home: both biologically and culturally.

Africa is the veritable mother country; the birthplace of man and human civilisation. But where and how did all this begin? Where were our original ancestors born? When was our first birthday? When did we actually diverged from Chimp to Human? And what first to the world cultural innovations came about, where no precedent existed help jog and inspire the mind?

Contemporary physical evidence corroborates to a fair extent that the proto-proto-human legacy actually started ~7 million years ago. However, the further one goes back to the chimpanzee/human divergence, the more uncertain taxonomical classification (innovation again!). Our utmost grandfather is named Sahelanthropus tchadensis, a ‘guest’ (my definition) member of the hominid tribe. The fossils were discovered in Djurab Desert of Chad in 2001. I might point out however, that many evolutionary zoologists and taxonomists, claim it to be a Small Ape. My point is, innovation – whether biological or technological – is far from a smooth ride when coming into being.

However, three-million years later, something more concrete emerged: the famous 4 million year old fossils of Dinknesh or ‘Lucy’ were excavated on the slope of a desert channel at Hadar located in Ethiopia.

The first tool making man, the much famed Homo-Habilis – Hand Man – was excavated in Kenya in 1961; estimated to be ~1,750,000 years old. Habilis has since been found in a variety of locations along the Rift Valley, as well as at Hadar, Ethiopia.

The dawn of Homo Sapien emerged in Africa ~200,000 years ago in. Bones of two humans were found in 1967 near Kibish, Ethiopia, and are the earliest known members of our species.

But what of memetic culture? It is debatable, but perhaps true that memetic culture began with the basic invention of controlled fire, which can be forensically traced back 1.4 million years to a range of South African caves. However, evolutionary anthropologists argue that intellectual culture begun with language. This is also debatable because memetics includes learned techniques and gestures, which clearly came before the invention of language. Commonsense tells that you copy people’s technique without a spoken word.

However, the basic invention of syntactic, verbal language, according to Johanna Nichols, a linguist at the University of California, must have arisen in our species at least ~100,000 years ago. Evidence suggests that language almost certainly emerged somewhere in sub-Saharan Africa during the Middle Stone Age.

It is worth noting that the ancient cultural history of Africa – way back before ancient Egypt – is rarely made known in modern western culture. As many know the vast majority of scholarly work on the genesis of science and technology is based on what the Babylonians, Greeks and Romans brought to the world.

People of African descent – that is you and me – come from a rich and elaborate legacy that invented a wealth of technologies and scientific bearings that set the platform for some of man’s monumental achievement.

Because if you have learnt that agriculture was born roughly 12 thousand years ago, well the information you gleaned was to some degree right, but mainly wrong. Like all technological innovation, agriculture did not begin in one giant leap for mankind in Natufian, South West Asia, 12,000 years ago; but in staged, staggered and in parallel modes, way-way back.

Although early ancient Africans were the first hunter gathers, with the first signs of self-fashioned weapons for hunting; proto-agriculture actually began in Africa.

Advancements in agriculture and husbandry advanced the variety of livestock. Goats, cattle, and sheep were reared; and camels and horses were tamed. As a result, meat was incorporated in the staple diet. Milk yields increased. Clothing became increasingly sophisticated, where wool became plentiful, and where animal hair was used for weaving.

To give calibration here, the most ancient fine art object in the world was discovered in a South African cave, dating back ~75,000 years. It is a series of tiny, ornately pierced snail shells which were possibly strung on a string as a necklace, clearly meaning that very early man was into art. But the collective ancestry and culture of achievements, though – by the evidence – actually got going – as densely cumulative – ~50-40,000 years ago.

Ancient Africans were the first people on earth to use metric counting systems, keeping track of stocks and accounts. Indicating the first level of municipal trade. By ~35,000 BC ancient Africans started using tally sticks or counting sticks; the first number system and basic calculator. The Lebombo bone, come across in the Lebombo mountains of Swaziland consists of 29 distinct notches cut into a baboon's fibula.

It is thought that early attempts to quantify the tick of time may be as much as 20,000 years old. The Ishango bone, found near the headwaters of the Nile River, consist of a series of register marks carved in flutes running the span of the bone. The speculation is that the Ishango bone depicts a six month lunar calendar. Others feel that it is the earliest known display of a sequence of prime numbers!

Eight thousand years ago, people, in what we now call Zaire, developed their own numeration system, as did Yoruba people in what is now Nigeria. The Yoruba system was based on units of 20 (instead of base-10) and required an impressive amount of subtraction to identify different numbers. Scholars have lauded this system, as it required much abstract reasoning.

Hence these artifacts speculate that the beginnings of rudimentary mathematics were applied in land-living and land-dwelling measurement, commerce, weaving patterns and the recording of time. However, it was not until ~3000 BC, when more structured functional maths such as arithmetic, algebra and geometry was applied by the Egyptians (and further east the Babylonians) for taxation and other financial calculations, building and construction, and astronomy. Distances and angles were calculated, algebraic equations were solved and forecasts were made of the size of floods of the Nile. The circle was gauged to have 360 degrees and got very close to Pi at 3.16. Hence, the Egyptian got to the wicket 3500 years before the Indians.

It is worth a technical note here that it is not so strange for two cultures to come up with similar innovations, when they are significantly separated by distance and time. This is known as Split Field Simultaneous Cultural Evolution. There is a lot to it. But fundamentally, and once again, we humans come from the same biological origins and ancestry (same brains, same basic survival challenges, and many of the same basic goals and motives). So it is not such a leap of faith to believe that two minds can come up with same idea, even though they have never met nor immersed in the same body of knowledge.

Take the early Egyptians. They began to chart the movement of the constellations and the cycles of the moon. They tracked the position and arch of the sun and divided an earth year into 12 divisions. They even concocted a yearlong calendar containing 365 ¼ days! From this, water powered and auto-calibrated clocks were invented. Time became manageable. And again, agriculture took yet another leap forward.

It gets even more fascinating and controversial. Again, most westerners learn early at school that Christopher Columbus was first to sail to the Americas. Not according to evidence that empirically states that ancient Africans sailed to both South America and Asia hundreds of years before Europeans.

13th century Africans constructed thousands of miles of waterways across Africa, using them as trade routes. Many ancient societies in Africa built a broad variety of vessels, ranging across small reed-boats, long sailboats and large scale ships with stowage areas, cargo spaces, cabins, and even galleys. The Mali and Songhai built boats 100 plus feet long and 15 feet wide with an 80 ton capacity.

It is widely known today that ocean currents flow from part of West Africa to the South Americas. And along with DNA evidence from indigenous African plants, and art and artifacts from societies inhabiting South America at the time, clearly tells that groups of West Africans cruised to South America to make it their home. In fact, scientists have recreated these antique master marinas and expedited transatlantic crossings. In the other nautical direction, while Africans were sailing to the Americas, these ancient peoples also sailed to China and back, carrying elephants as cargo.

It is also now agreed that Egyptian hieroglyphs dates back to ~3400. This disputes the commonly held belief that early pictographic symbols and logos that codify location, types of object, size and importance first evolved into phonetic symbols in Mesopotamia. A belief that was held for many centuries. Curiouser and Curiouser!

And so now you know what many western people do not know or have at least not shared. But the story does not end there. Because the amount of people I bump into that simply will not believe what I have just alleged, explains why the Ancient Rome and Greece paradigm of history still dominates most people mindsets. It is time to wake up. Because as I said: Africa is BIG!