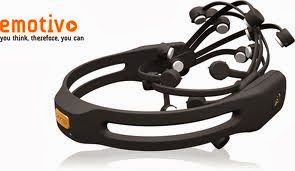 A San Francisco–based neuroengineering company called Emotiv is developing a brain–computer interface that they say will be available commercially.

The EPOC neuroheadseuses EEG technology to read electrical patterns in the brain and then sends this information through wireless signals to a computer.

According to Emotiv, the headset will be used with new biofeedback games or can be incorporated into popular PC games like Harry Potter, where characters could pick up and move objects with the power oftheir minds.

In addition, the EPOC could eventually be used in multiplayer online games like World of Warcraft or Second Life to control facial expressions of virtual game characters in real time. Emotiv claims theheadset can detect and replicate thirty different emotional and facial expressions, including excitement, anger, laughter, and calmness.

Unlike earlier EEG devices, the EPOC is the first commercially available EEG neuroheadset that does not require gel on the scalp or an elaborate net of electrodes, and will be sold for the consumer-friendly price of $299.

The EPOC will bebundled with Emortal software, which enables you to use the headset to browse your computer files and applications, and also to connect to other Emotiv users in live chatrooms.