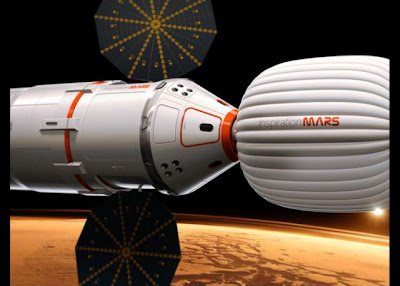 'Dennis Tito, the world’s first space tourist, plans to send a married couple to Mars in 2018. The married couple will leave Earth in January, orbit Mars at an altitude of 100 miles (160km) in August, and then return home. The entire journey will last a total of 501 days; the longest continuous time ever spent in space. Spending so long in space will result in the astronauts being bombarded by a lot of solar radiation, increasing their risk of developing cancer by 3% — but Tito’s CTO has a plan: creating a radiation shield out of the astronauts’ poop.....'
Click to continue report.
Posted by Unknown at 13:55