Space for all coming soon? 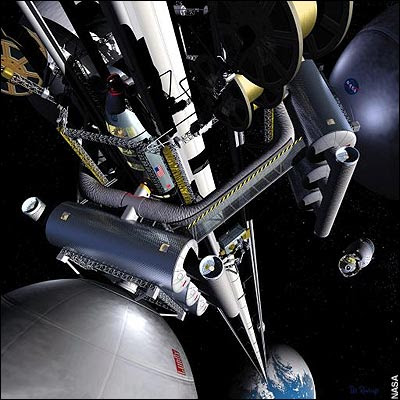 Recall the much loved story 'Charley and the Great Glass Elevator?' It may be a metaphor for the shape of space-flight to come!

Not to worry, I'm not going to try to convince you that we are all about to attach large silicon boxes to space anchored sky-hooks.

But from serious fact to fascinating fiction Space Elevators have been called space bridges, space ladders, beanstalks, skyhooks, and the great glass elevator.

So, now down to earth (and maybe up again).... What is actually happening?

Believe it or not the original idea goes back to 1895 to Konstantin Tsioikovsky. Back then he proposed a free standing Tower stretching to a level where obits can take place. That's where earth's atmosphere and its gravitational pull relinquishes to a point where masses can hover or can circle the earth. And that happens at about 170 kilometers up.

Most space Elevators ideas hang on tether and sheet like cables, where the structure is in tension on earth and counter weighted in space like a guitar string held taut. Problems is, a tether material made, for example, of Carbide Steel (CS) with a diameter of a mere 1mm would snap under its own weight. In fact the total mass of CS needed to construct such a structure would be so great that the cable would break in less than 2000 meters down.

News is that the much much famed CarbonNanoTube (CNT) is around 20 times the strength of CS in its natural from. Even better news is the kinds of molecular bonds obtainable from CNTs. They give an extraordinary number of creative interconnections, resulting in ultra-strength multidimensional geometric weaves. This Hypermaterial offers not just linear strength (20x steel), but 1000x the strength of steel, with at least 1000x less the weight.

But how strong does a Space Elevator tether have to be?

Many numbers are bandied about, and usually with a designation of GPa (Giga-Pascals) as their unit of measure. However, a GPa figure is meaningless without a density figure to go with it. The metric at question is GPa/(g/cc), or specific strength - strength-per-density.

The textile industry, which often deals with specific strength of materials, uses the unit of N/Tex. If you work out the units, a N/Tex turns out to be exactly equivalent to a GPa/(g/cc). In the metric system, we define 1 Yuri = 1 Pa/(kg/m3), and so a GPa/(g/cc) or a N/tex are equal to 1 MYuri (Mega Yuri).

Think about it this way: if you pull on a garden hose and it breaks at 100 lb, and if the diameter of the hose is such that its area is 2 square inches, can you say that the rubber failed at 50 PSI? Of course not - the hose is mostly air, only the wall of the hose is holding the force. you should use the area of the wall, not the hose.

In exactly the same way, if 12 inches of the garden hose weighs a pound, can you say that the density of the rubber is 1/24 [lbs/in3]? Of course not - only the wall of the hose has weight.

BUT!!! You can safely say that the *specific strength* of the rubber is 50/(1/24)=1200 PSI/(lb/in3) and you don’t have to even measure the diameter of the hose - just divide the breaking force (100) by the linear mass density (1/12), and you get the same exact number (1200). The cross-sectional area canceled out, and the only two things we need to measure is the breaking *force* (in lbs) and the weigh-per-linear-inch. Hence N/Tex.

So back to the Space Elevator: computer simulations of CNTs cap the specific strength of individual tubes at between 40 and 50 MYuri. Practical measurements seem to converge on that number as well. The density of Carbon Nanotubes is 2.2 g/cc, so using this density the proper strength figure is 88-110 GPa.

Remember though, it’s the 40-50 MYuri figure that’s the deal maker. We can build a Space Elevator using a 40 MYuri material. Even 30. It’s just that the lower the specific strength, the heavier the ribbon, and the more powerful our motors have to be.

So when will this all happen?

I'll come to that in later blog postings. But for now I would urge you to spend sometime watching the video.