Larry Page has personally recruited Ray Kurzweil (of 'The Singularity is Near' fame) as the new Director of Engineering at Google. 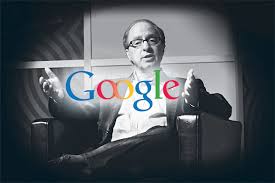 Kurzweil'S main goal at Google is to enable computers to comprehend and speak language just like humans while creating machines that can think and reason like the human brain.
His project is to advance Google computer systems to understand natural language, not just do search and answer questions based on links and words, but actually understand the semantic content.
This involves employing technologies that are already at Google like the Knowledge Graph, which has 700 million different concepts and billions of relationships between them. He is also developing biological software systems that can learn in ways analogous to the way the brain is designed, that is, in massively parallel hierarchical structures.
Kurzweil says that natural language understanding is the most important part of artificial intelligence. We first saw this when Alan Turing defined the artificial intelligence field in 1950, when he focused on natural language.
If a computer can be indistinguishable from a human in terms of written language communication, it is then at least beginning to operating at the full range of human intelligence.
He met with Larry Page about his book How To Create A Mind in July 2012. He said he wanted to start a project based on these ideas. Page convinced Kurzweil to do it at Google as the resources already uniquely at Google.
Google has been taking steps to make search more intelligent and human like. As new technologies are linked into one system that can understand language at a deeper level, an exponential rise in understanding of language will likely follow.
With Kurzweil at the helm it is likely to speed up development of artificial intelligence, even helping to make his prediction that a computer would pass the Turing Test by 2029

Ray Kurzweil’s new book — How to Create a Mind: The Secret of Human Thought Revealed 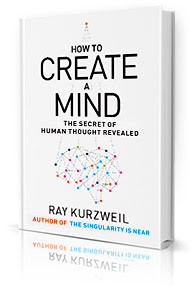 In the book, Kurzweil explores the most important science project since the human genome: reverse-engineering the brain to understand precisely how it works, then applying that knowledge to create vastly intelligent machines.
Drawing on the most recent neuroscience research, compelling thought experiments, and his own research and inventions in artificial intelligence, he describes his new theory of how the neocortex (the thinking part of the brain) works: as a self-organizing hierarchical system of pattern recognizers.
A roadmap to superintelligence
Kurzweil shows how these insights will enable us to vastly extend the powers of our own mind, and provides a roadmap for the ultimate creation of superintelligence — humankind’s most exciting next venture.
“We are now at the dawn of an era of radical possibilities in which merging with our technology will enable us to effectively address the world’s grand challenges,” he says. “We are already seeing artificial intelligence go mainstream with the recent innovations of IBM’s Watson, the iPhone’s Siri, and Google’s self-driving cars.
“The inevitable next step is that our brains will soon be merged with the intelligent technology we are creating. By around the 2030s, nanobots in our bloodstream and brains will keep us healthier and smarter, most of our thinking will be in the cloud — unhindered by the natural limits of our biological brain and easy to back up like a hard drive, and we will vastly speed up the learning process.”
How to Create a Mind is Ray Kurzweil’s seventh book, joining The Age of Intelligent Machines, The 10% Solution for a Healthy Life, The Age of Spiritual Machines, Fantastic Voyage: Live Long Enough to Live Forever, The Singularity Is Near, and Transcend: Nine Steps to Living Well Forever.
“One of the eminent AI pioneers, Ray Kurzweil, has created a new book to explain the true nature of intelligence, both biological and non-biological,” said AI pioneer Raj Reddy. ”The book describes the human brain as a machine that can understand hierarchical concepts ranging from the form of a chair to the nature of humor. His important insights emphasize the key role of learning both in the brain and AI. He provides a credible roadmap for achieving the goal of superhuman intelligence, which will be necessary to solve the grand challenges of humanity.
Posted by Unknown at 19:28