The Mad Billionaire Behind GoPro
The World's Hottest Camera Company 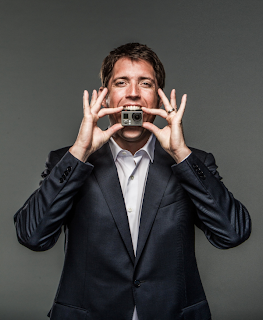 Nick Woodman is 37 years old. His constantly tousled sepia hair and permanent, mischievous half-grin make him look 27. And he acts 17, as I learn 30,000 feet above the Rocky Mountains, after Woodman packed me, his wife, Jill, and a dozen of his favorite colleagues and buds into a chartered Gulfstream III en route to Montana’s Yellowstone Club, the most exclusive ski hill in the U.S.
Already hopped up on Red Bull, tempered by a liter of coconut water, Woodman darts about the cabin, occasionally breaking conversation to unleash his trademark excited wail that friends liken to a foghorn. “YEEEEEEEEEEEEEOW.” A flight attendant emerges with breakfast on a silver platter. “You know what the best thing about morning ski trips are?” he asks the cabin rhetorically. “McDonald’s!” And with that he inhales a McGriddle in all of three bites.
The man-teen routine is more than an act: It’s the recipe for how he’s become one of America’s newest and youngest billionaires. A decade ago Woodman craved a camera he could strap to his wrist so that his buddies could see his surfing exploits. The result is now a consumer phenomenon called GoPro, America’s fastest-growing digital imaging company.

Go anywhere active these days, whether it’s the mountains of Vail or the scuba-diving depths of Honolulu’s Hanauma Bay, and you’re bound to see a GoPro or 20. Kids these days don’t film their wave rides or half-pipe tricks. They GoPro them, strapping the $200 to $400 cameras to helmets, handlebars and surfboards. The cinema-grade, panoramic “point-of-view” footage that comes out of a GoPro transforms mere mortals into human highlight reels, without blowing a huge hole in the budget. Shaun White, who says he used to tape old cameras to his hand, used GoPros on his runs during the Winter X Games. Hollywood directors, including Michael Bay, keep crates of them on set. The NFL has tested them in their end zone pylons to capture touchdown replays. The Rolling Stones deployed them on stage. Police forces and the U.S. military have started to incorporate the cameras into training exercises. Woodman, who calls it a “life” camera, proved the point by wearing one on his chest at the deliveries of his sons. On the plane to Montana, Woodman’s GoPro crew rigged their devices in every cranny in the cabin, including on the pilots’ heads, to document their journey.

GoPro sales have more than doubled every year since the first camera’s debut in 2004. In 2012 the company sold 2.3 million cameras and grossed $521 million, according to Woodman; with $100 million in sales in January alone, that annual figure should again double this year. For the month of December GoPro was the highest-grossing digital imaging brand at Best Buy, knocking out Sony for the first time in the chain’s history. Just ten years old, GoPro was responsible for 21.5% of digital camcorder shipments nationwide in the first half of 2012, according to IDC data. Among “pocket camcorders” that figure swells to a third.

This type of growth and niche dominance have made for a “rad” business proposition, with Chinese electronics manufacturer Hon Hai Precision Industry Co., better known as Foxconn, making a $200 million investment in GoPro in December. That valued the San Mateo, Calif. firm at $2.25 billion and shot Woodman, who sources say still owns about 45% of the company, onto the FORBES World Billionaires list with a net worth of $1.3 billion.
It’s a head-spinning turn of events for a 37-year-old Peter Pan running a billion-dollar technology company. As he barrels through Yellowstone’s freshly groomed powder in a pea-green helmet, it’s clear he’s found bliss. “YEEEEEEEEEEEEEEEOW,” he howls from his bloodied and chapped lips as he GoPros his every turn.
Posted by Unknown at 17:35