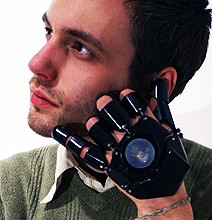 Even though I'm in the throws of writing a new book about the cusp of markets and technology, I'm sometimes guilty for forgetting how fast all this is going forward.

My post below (22 Jan) said printing a telephone out is restricted to 'technology permitting,' then I come across this:

In the midst of the hype about the iPhone 5 and all the new phones from the other smartphone manufacturers, there is a small community of people who are constantly trying to bend what is mainstream into what could possibly become the next generation technology when it comes to making mobile calls. There are a lot of concept designs out there that are both innovative and unique, and their only reason for not hitting the market is mostly lack of funding and refinement. Sure, there are a bunch of concept designs for predicted versions of what’s already out there too. Those are mostly rendered images of someone’s idea of where things are headed. Usually they turn out to be nothing more than just that, concept designs.

For the more serious innovators, things can materialize into something real that they are able to showcase to the masses. One such innovator is Bryan Cera who has been tinkering on something that could only be described as Iron Man‘s personal cell phone in a glove. It’s no surprise his concept is called Glove One and is a dial keyboard, SIM card holder and microphone speaker all in one.

It’s hard to determine whether this kind of approach to a cell phone is the path to the future, but it’s damn cool if you ask me. The ability to receive and make calls from a glove, which I am sure could have many more uses than just a cell phone, is pretty much science fiction. If anything, it’s one of those gadgets that will have you dream of other awesome tools á la Iron Man. I doubt we’ll see these in a store anytime soon, but I think Bryan is onto something quite extraordinary. I think if the glove had just a few more unique features to it, it could actually become something that could be used in all our lives. The question is of course whether or not you, the users, would settle for a cell phone like this instead of that Smartphone of yours.