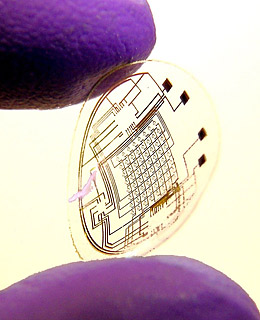 What if instead of having your television cluttered with interface elements while playing an FPS, you could have the HUD displayed directly on your eye?

Bionic contact lenses are being developed to provide a virtual display that could have a variety of uses from assisting the visually impaired to the video game industry. The device will have the form of a conventional contact lens   with added  bionic technology. The lens will eventually have functional electronic circuits and infra-red lights to create a virtual display.

Engineers have, for the first time, combined a flexible, biologically safe contact lens with an imprinted electronic circuit and lights. The lens could give wearers a new look at the world by superimposing  computerised images onto their natural view.

Such virtual displays could be useful to drivers and pilots, who could obtain route, weather, or vehicle status information overlaid onto their vision. Video-game players could immerse themselves in a virtual world without restricting their range of motion.

The lens could even be paired with sensors that monitor a person's biological conditions -- cholesterol level or the presence of viruses and bacteria, and transmit the data wirelessly to a computer.

For example, miniature cameras with adaptive lenses could be incorporated, able to zoom in on something far away or to look at something very close.

Click link for tech overview.
Posted by Unknown at 18:39