I've done a lot of one-to-one and team coaching over the years. And my skills are all ways developing in this area.

Admittedly I am fortune, as I get to work with innately smart, creative people. 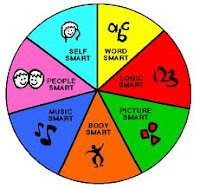 But, I have over the many years asked myself what intelligence is?

From an application point of view (as in when being smart comes in handy) are there many kinds of intelligence?

According to Howard Gardner, there are 7 main types of intelligence, that are all valid, and more so at different combination of time and situations.

In particular, the work of Howard Gardner is of interest as I've developed psychometric tests, games and pursuits in team build programs based on his work.

Here's an snip from a paper linked below about his work:

'Howard Gardner initially formulated a list of seven intelligences. His listing was provisional. The first two have been typically valued in schools; the next three are usually associated with the arts; and the final two are what Howard Gardner called 'personal intelligences'.

In the post below, I've come across a fun 'Brain Training' website, that's on free trail. Play it later. It's fun, yet challenging.

However, you can learn more about his work here.  Plus a site, that takes you further into his subject.

Happy Brainyacking!!
Posted by Unknown at 19:08