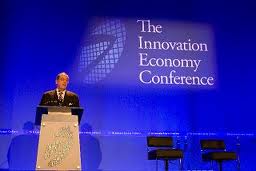 Welcome to the year 2020! It hot, is it not? However, do you recall the recession back in 2012? Well, that was a breeze compared to what we now face in 2020! Most of us was aware of the consequences of an economy that is interconnected. What we didn’t know was how it would affect us now at the beginning of the 3rddecade of 2020!

The connected economy was just the beginning. Because once the richness of interconnections hit a vital number, it reached a point of critically where the economy began to evolve at super-accelerated rates. And that meant that the rules of engagement fundamentally changed: It became an Innovation Economy. An innovation economy that is nonlinear, warp-speed and counterintuitive. And the rules of such an innovation economy are paradoxical, capricious and surprising.
Here are 4 new rules and solutions for an economic situation we are all going to have to get used to negotiating: 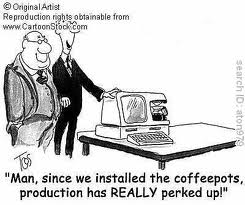 The rule of inverse productivity. Way back in the ancient 1980s (A.D) it took 1,000+ people to run a noisy, quite treacherous steel mill. Now it takes less than 10 people. Process technologies that control the mill are now that advanced that most people controlling the plant sit in offices the other-side of the world.
In new product development it’s the same: what took 20 engineers 3 years (a landline telephone for instance) to put into production, now takes 1 multidiscipline engineer 1 month. Computer Aided Engineering and Analysis Systems have dropped so dramatically in price-performance, that even the smallest company can afford a full suite of kit from end-to-end of the design and manufacturing process.
Intelligent service systems such as automated self-service pubs, clubs, cinemas and restaurants are common place now. This simply and clearly means more and more, faster and faster, smarter and smarter, for less and less direct human workers, materials and tools. And that means the once economic Holy Grail ‘productivity’ has been going inverse and more acute over time.
If you think the worldwide total of 1.2 billion workers that were unemployed back in 2012 is large; once the dozens of emerging nations achieve full blown ultra-yield technological production systems; most of the world’s population will be unemployed.

Solution. Pumping investment and creating sufficient numbers of new roles is important, but not merely enough. New enterprise start-ups do sustain jobs. But, the major effort is to inspire, create and develop a global culture of entrepreneurialship, innovation and enterprise.
Avoid encouraging or threatening people to look for jobs that are not there. Promote, praise, idolize individuals that create their own productive and well paid work. Make a living out what you enjoy. Better still, become aGigaEntrepreneur.

The rule of exponential price-performance improvements. In the 1970s, what took a room the size of a football pitch to house a computer the size of a building with hundreds of people to design, build and maintain the supercomputer, now costs ~30-dollars for a system that has 1,000,000 times the processing power that is the size of your palm (Hyperphones, Ultrabooks, nxPADs, et al).
Technology is shrinking toward the invisible, whilst performance and functionality is expanding toward the multidimensional. Microprocessors are now Nanoprocessors handling multiple-terabytes of data. Computer speed and memory capacity, material strength, durability, environmental endurance is going in the same direction. In fact, technologically, this is happening virtually everywhere.

Solution. The goal, then, is to offer leaps in functional performance at a sustained price point. Or more and different for less, thus driving-up volume and differentiation in sales. 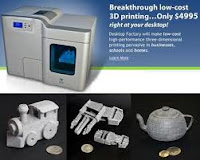 The rule of digital disintermediation. We have all heard of friction free economics. That the digital economy has much shorter, often direct supply/value chains. The long-value/supply chain’s tail with dozens of stages is and will continue to contract and reduce in stages.
We saw this happen with digital virtual products and services with the likes of Amazon.com, iTunes.com, VEVO.com, eBay.com back in the 2000s.
And now in 2020 rapidly growing 3D-printing and additive manufacturing at home. That is machines that output basic components (washers, screws, brackets, elemental shapes, et al) and simple electrical gadgets (TV remote controls, digital watches, torches, et al) in one go by downloading digital models, taking the data and turning it into real artefacts by laminated/additive synthesis.
This is potentially the most disruptive and powerful challenge economically in 2020.

Next, integrate design and build; unleash the data on the web. Producers and consumers not only become pro-sumers, but economic champions and stewards. Hence, designers and artisans now flourish. That is jewellery stylists, sculptors, custom furniture designers and fashion aficionado thrive all from the comfort of their home. DIY innovation has arrived!

The rule of instant retail. Commercial value-chains and associated supply-webs have shrunk to an iota in scale. Retail shops are now mostly automated. Again, few opportunities for employment. Another disruptive economic conundrum to fix!

Solution. You still go for retail therapy. But the experience has not only changed, since 2012; it has turned into safari-adventures and wonderland excursions. High Street shopping is now a bright, fun night out on the town or a countryside relaxing enjoying encounter. Your local shopping mall is an adventure playground. 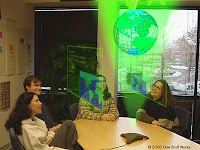 But you don’t have to venture out the door to pick up your new goods or wait for FedEx to deliver!Instant Retail is here. High resolution holographic projectors beam your new tee-shirt or clutch bag in full colour 3D in front of you. Ultrasonic beam projectors make the hologram touchable. So you can not only look at it, you touch and feel it in real-time.
You like the new gadget you’ve just eyed? So transfer your bank account details; down load the 3D digital model to your 3D printer. Make it, take it, and off you go! Instant Retail is here!!

All of the technologies for this are beginning to roll out of the R&D lab now in 2012. So think we’ve got economic challenges today? The Innovation Economy is just over the horizon...Go figure!!!
Posted by Unknown at 18:31