The quest to build more-powerful multiband mobile handsets has gotten a boost from a relatively new class of materials. Called metamaterials, they are specifically engineered to have properties that do not occur naturally, such as the ability to bend light the wrong way. For manufacturers of mobile devices, recent advances in metamaterials promise a way to shrink size while still retaining multiband functionality. 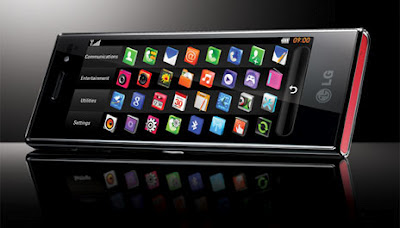 LG Electronics’ new Chocolate BL40 mobile handset, from its high-end Black Label Series, will incorporate a metamaterial antenna made by San Diego–based Rayspan, a start-up that’s pioneering the commercialization of metamaterials. LG is the first company to use metamaterials in mobile handsets. Metamaterials have allowed LG to "achieve the dramatically sleek, slim dimensions of the new LG Chocolate and unsurpassed radio-frequency capabilities," says Woo Paik, LG’s president and chief technology officer.
Anirudh Srinivasan, an analyst with Frost & Sullivan, says, "Metamaterial antennas satisfy this void by enabling the antennas to be sized on the order of one-tenth the signal’s wavelength and yet providing performance on par or better than conventional antennas sized one-half the signal wavelength, thereby providing a whopping five times the size reduction."
Maha Achour, Rayspan’s chief technical officer, says the antenna used in the LG handset is a few millimeters long and as thin as paper, and it simplifies the integration of both GPS and Bluetooth protocols. The same antenna array is also shared by the cellular and Wi-Fi radios within the handset.
Though the BL40 is the first handset to incorporate a metamaterials antenna, Netgear’s 2008 RangeMax wireless routers were the first commercial devices to use them. The Rayspan antenna allows the routers to reduce radio-frequency interference and boost the router’s range.
The metamaterial antennas, which are fabricated directly on the router’s printed circuit board, have proved to be robust. "There are over 20 million metamaterial antennas in the market," says Achour. "None of them require any customer support." They are inexpensive as well, she adds.
Metamaterials have become a very popular research topic in the past decade, partly because they could lead to such oddities as invisibility cloaks. The major impetus for metamaterials research came from the work of Sir John Pendry of Imperial College London. In 2000, he wrote about creating a perfect lens with a metamaterial. He also theorized that you could design magnetic materials using structures made of nonmagnetic materials. For instance, although copper isn’t magnetic, he hypothesized, a construction made of minuscule copper loops embedded on fiberglass should be. Experimentalists seized upon the idea, and as Pendry predicted, electromagnetic wave propagation through metamaterials is fundamentally different than through conventional materials.
Rayspan set out to harness metamaterials for wireless technology. "For 4G devices, you need to be able to handle multiple frequencies," Achour explains. "With conventional antennas, you cannot put two antennas together with coupling. Metamaterial antennas allow you to support four to six frequency bands." It is also difficult to get high performance from a small, ordinary antenna, she adds, but metamaterials make it easier.
Because metamaterials seem to allow mobile-phone manufacturers to reduce the size of handsets while maintaining good performance at low cost, Achour predicts that others will follow LG’s lead. "Metamaterials will be in your living room," she says.
Posted by Unknown at 18:52