How Your Shoe Can Secretly Help You Text 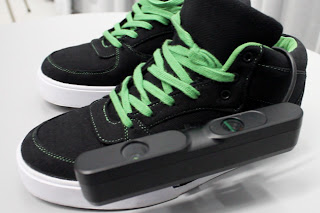 Technology and etiquette don’t move in lockstep. Just because it’s possible to whip out your smartphone and connect from anywhere doesn’t mean you should. Text during a meeting and you risk offending your boss, e-mail during family dinner and you risk displeasing your spouse, peruse your MP3 collection during a football and you risk missing that goal.

A new device being developed by engineers in , however, promises to liberate smartphone addicts from the strictures of social opprobrium, making it easier to work their devices sneakily under the noses of those who might judge them for it. The gadget is called ShoeSense. It’s a motion sensor that, indeed, mounts on a shoe. Facing upward, it allows a user to control his phone through hand gestures performed at midriff level, even when the phone is still stored away in his pocket. Pinch index finger and thumb together and move your hand slightly forward to answer the phone or hang up, touch one hand to the other forearm to send a prewritten text, hold out a number of fingers to communicate whom on your speed-dial list to send it to. A person using ShoeSense looks a bit like a theremin player.
If the ShoeSense user is sitting at a desk, however, or a conference table, he looks as if he’s not doing anything at all and instead paying you his undivided attention—even as, sub rosa, he’s semaphoring his phone to send out a text about happy hour. “It is quite discreet,” says Gilles Bailly, a computer scientist at Technische Universität and Deutsche Telekom (DTE) who is one of ShoeSense’s creators. “Say you are in a meeting, you want to indicate that you are going to be late. You’ve already defined the gesture for this, and you perform the gesture under the table. The system on your shoe can recognize it, and nobody at the meeting knows that you performed the gesture.”

ShoeSense is still a long way from showing up in your next pair of Nikes. Bailly’s lab is still tinkering with it. Still, bosses might prepare for its eventual arrival—perhaps by installing glass conference tables or by asking that, during meetings, people keep their hands where everyone can see them.
Posted by Unknown at 16:54