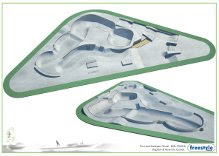 A little (not so actually) project I have been assisting on with Brighton and Hove Skateparks Association (BHSA) and Brighton Parks Authority. A new concept based on the contemporary ‘Snake Run,’ but with a twist:

The ‘King Cobra’ run – if you take a close look at the plan view – is akin to a curled up Cobra (see outline). The large 'Diamond' shaped bowl at the end of the snake run resembles the head of a King Cobra!

The fact remains that Brighton City has one of the largest Skateboarding/BMX populations per head in the UK; and has been waiting for this since both the ‘Cage’ and ‘Bath’ Skateparks closed in the late 70s and early 80s. No wonder the Skate community is behaving like an incensed Mongoose!!

Commissioning is due to begin in October, and launch May time next year!!!