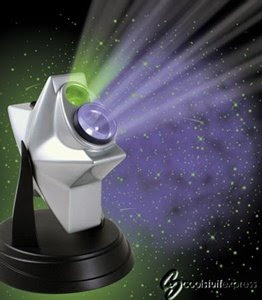 Holograms in your pocket!

One exciting example is the research going on at the Photonics and Sensors Group at the University of Cambridge. Developing breakthrough holographic technologies, which will power a new generation of pocket-sized holographic projectors.

Holographic projections are in fact surprisingly simple, requiring only a few components, which means they can be made very small. In the near future, holo-projectors will be integrated into laptops, PDAs, even mobile phones.

So why has this not been done before?

(1) Holograms are extremely complex objects mathematically, and calculating them fast enough for video applications is very difficult; even the most powerful computers of - in real-time - the past would take minutes to calculate, generate and project even very a simple holographic video frame.

(2) The projected images produced by early holographic technology tended to be speckled and of very low definition quality.

(3) The lasers that are required to illuminate the holograms have, until very recently, been very expensive and limited in availability.

But this is now history.

Several major breakthroughs have been made, together making possible the generation and display of high quality holograms at video frame rates, using just a single custom chip.

So how does it work?

A hologram pattern, which to the eye looks like a collection of random dots, is displayed on a small liquid-crystal-on-silicon (LCOS) microdisplay - a tiny, very fast liquid crystal display built on top of a chip.

The hologram patterns are calculated by a custom ‘holo-chip’ so that when the microdisplay is illuminated by laser light, the light interferes with itself in a complex manner through the physical process of diffraction, which when carefully controlled, results in the formation of a large, high quality projected image on, for example, a screen or a wall. 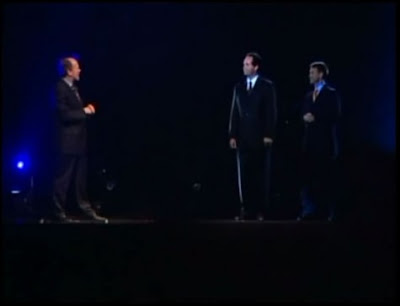 Telstra - the Ozzy Multimedia Corp - used the Musion Eyeliner System to beam a live holographic image of senior staff member, between Melbourne and Adelaide, in what has been billed as world first.

Telstra’s chief technology officer Dr Hugh Bradlow, based in Melbourne, appeared at a business function in Adelaide as a real-time holographic effect and interacted with members of the audience for around 15 minutes.

The real time hologram of Dr Bradlow was made possible by the company's high-speed networks and the Musion Eyeliner holographic projection system.

We've all seen this sort of thing in sci-fi , but the reality is here, now and demonstrated.

Kate Moss as OB1-Wan Kenobi: is she our only hope? 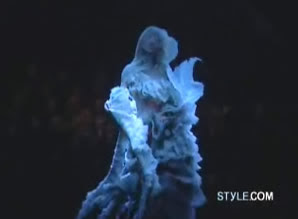