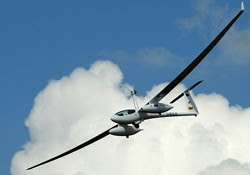 This Tuesday, the Antares DLR-H2 took off at Hamburg Airport in Germany using only power from Hydrogen Fuel Cells, a feat that its builders say is a first for a piloted aircraft.

The motorglider, built at the German Aerospace Center, flies with zero carbon-dioxide emissions and is much quieter than similar aircraft. "

This motorglider achieves new quality standards in the field of high-efficiency, zero-emission energy conversion and clearly demonstrates the progress that has been made in fuel-cell technology.

The DLR-H2 is based on the Antares 20E motorglider, and has a wingspan of 66 feet. With its fuel-cell propulsion system, the aircraft can stay aloft for five hours and reach speeds of about 105 mph.

With the successful first flight, they have verified the feasibility of fuel-cell-powered flight and their next steps will focus on improving efficiency levels and on extending the service life of these systems.

At this stage, they have only tapped into a fraction of the performance capabilities of this technology for aerospace applications. The Antares DLR-H2 will help make much greater use of these areas of potential.

To accommodate the fuel cell and its hydrogen supply, two external pods were attached under the aircraft's wings, which were reinforced to carry the load. The total efficiency of the drive system from tank to powertrain, including the propeller, is about 44 percent, making it about twice as efficient as conventional propulsion technologies based on combustion processes, according to the Aerospace Center.

For more details about the project, click here to read the Aerospace Center's lengthy news release.

Or watch a short video on the Antraes DLR-H2 Maiden flight!