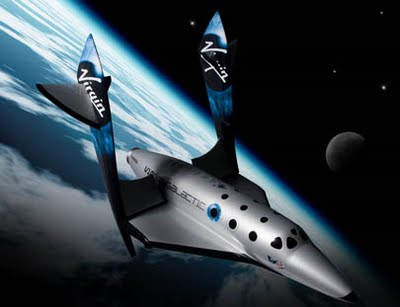 Space for all coming soon (Part I)?

5 years ago, on 29 September, the space industry was turned on its head by a tinny spacecraft made in a workshop in California's Mojave desert.

SpaceShipOne (SS1) successful flight flew in a new era. One in which space flight would one day be affordable, frequent and accessible to you and me.

SS1 was the first crewed spacecraft to be developed privately. Designed, built and flown on a budget of roughly $25 million, it was towards 10,000x cheaper than the Space Shuttle life costs to date.

SS1 broke the altitude record for winged vehicles set more than 40 years earlier by NASA's X-15 rocket plane. Clearly, a fully reusable space-plane is an essential milestone on the road to a real space-flight future. And yet years on it's easy to regard SS1 as anoma than a pertenant future trend. After making 2 sub-orbital flights in 2 weeks, it never flew again.

However, 'Spaceship Company' - a partnership between SS1's creator Burt Rutan and Richard Branson - have yet too unveil the larger passenger-ready SS2, although the company has revealed the Carrier Aircraft designed to launch it.

Whatever its limitations, SS1 has galvanised attempts to break the 'Space Access' problem. There are now many many more spacecraft development efforts under way than at any point in the history of space flight.

So which idea, or set of ideas, will produce the breakthrough vehicle?

To achieve a true revolution in cost and reliability we have to make a truly reusable system. And that's an enoumous technical challenge. Yet this challenge is gradually yielding to human ingenuity and innovation.

A company called 'SpaceX' has successfully flown its Falcon rocket, after several aborted attempts; and other companies are doing evermore advanced tests with new engines, systems and designs. And one long-awaited test flight later this year may herald a major technological breakthrough in air-breathing engines that could power a winged vehicle from runway to orbit.

Both of these efforts will bring low cost and reliable space access much closers. However, there's much more afoot than meets the eye (see part II below)
Posted by Unknown at 14:27