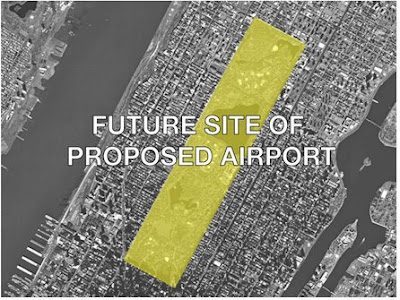 Looks as though I'm gonna be spending a lot more time in NY! Was a bit perturbed. As journy time from my B-2 home is realy frustrating.

Word on the street is that New York City may be getting a new addition: The Manhattan Airport. And what better place to develop it than on the largest piece of undeveloped land in New York City -- Central Park?

New York City is THE cultural and financial capital of the world. Not London. Not Tokyo. Not Rio.

Yet surprisingly, New York City has no viable airport.

JFK, La Guardia and Newark work for people who live in certain outer boroughs. But they are not an acceptable option for people like me and New Yorkers, requiring travel through some of the most congested traffic arteries in the nation.

A journey which by train takes nearly two hours and by automobile can take up to three sweating hours. For a place which purports itself to be the greatest city in the world, this is not a workable model.

What I’m drawn to is the Central Park turned-airport concept.
Posted by Unknown at 18:39