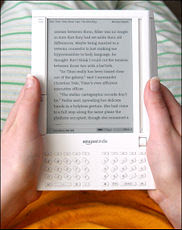 It uses an electronic paper display, also called e-paper, is a display technology designed to mimic the appearance of ordinary ink on paper.

Unlike a conventional flat panel display, which uses a backlight to illuminate its pixels, electronic paper reflects light like ordinary paper and is capable of holding text and images indefinitely without drawing electricity, while allowing the image to be changed later.

E-paper is considered more comfortable to read than conventional displays. This is due to the stable image, which does not need to be refreshed constantly, the wider viewing angle, and the fact that it uses reflected ambient light.

Kindle downloads content over Amazon, and can be used stand alone without a computer.

On the release day, the Kindle had more than 88,000 digital titles available for download, but that number has steadily increased.

Amazon's first offering of the Kindle sold out in five and a half hours and the device remained out of stock until late April 2008.

At launch, the device retailed for $399; Amazon subsequently lowered the price to $359.
Posted by Unknown at 02:09