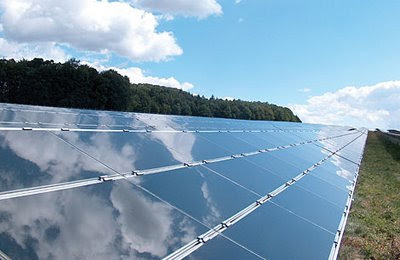 It’s easy to make a small pile of money off photovoltaic cells but very hard to make a big one. The reason is one of the most fundamental in free-market economics: the larger the market you aim for, the more competitors you’ll have to face.

If you just want to power a billion-dollar space probe, almost any price per watt is acceptable. If you are selling to lonely farmhouses, you just have to charge less than the cost of running a power line to the national grid.

In some parts of the world, competing with grid electricity itself may be an easy game during peak consumption hours. But if you want the off-peak market, you’ll have to price your cells at about US $1 per watt (a 1000 watt solar array would obviously cost $1,000)

That price is called grid parity, and it’s the holy grail of the photovoltaic industry. At least 80 firms around the world, from Austin to Hayward’s Heath, are in the chase.

Surprisingly, at the moment no company is closer to that grail than a little start-up called First Solar, which until very recently had been known only to specialists.

It’s got a multibillion-dollar order book, it’s selling all the cells it can make, it’s adding production capacity as fast as it can, and its stock price has rocketed from $25 to more than $250 in just 18 months.

(1) Its active element is just a hundredth the thickness of the old standby, silicon.

(2) It is built on a glass substrate, which enables the production of large panels.

(3) Manufacturing takes just two and a half hour, about a tenth the time it takes for silicon equivalents.

Of course, it’s not enough that First Solar match the costs of fossil-fuel generation on the grid; it must also maintain its economic edge over other photo­voltaics.

There are additional nascent technologies, including cells based on copper indium gallium silicon (CIGS) on glass; and the combination of germanium, gallium arsenide, and gallium indium phosphide.

Even conventional silicon technology, which has dominated the market since its commercial launch in the 1950s, seems to have a lot of kick left in it.

Currently, though, it’s suffering from its own success, as an insatiable demand for silicon cells has led to a scarcity of raw material.

However, if the silicon shortage disappears by the end of the decade, as expected, the sale price should drop substantially from recent levels, which have fluctuated between $3 and $4 per watt.
Posted by Unknown at 22:43